Coinbase (NASDAQ:COIN), one of the largest cryptocurrency exchanges in the world, took investors on a wild ride after its direct listing last April. It went public with a reference price of $250, hit its all-time high of $429.54 on the first trading day, and eventually closed at $328.28 per share.

Today, Coinbase trades in the mid-$230s. The market’s initial enthusiasm fizzled out as Bitcoin‘s (CRYPTO:BTC) gains stalled, other speculative cryptocurrencies lost their momentum, and a growing number of regulatory threats cast dark clouds over the nascent industry.

But have investors become too bearish on this high-growth cryptocurrency stock? Let’s compare the bear and bull cases to find out.

What the bears will tell you about Coinbase

The bears dislike Coinbase for three main reasons: its unpredictable growth, the regulatory threats, and the competitive challenges.

However, Coinbase generates nearly all of its revenue from cryptocurrency trades, and its growth is pegged to the market’s fickle interest in Bitcoin, Ethereum (CRYPTO:ETH), Dogecoin (CRYPTO:DOGE), and other major cryptocurrencies. Over the past three months, the market’s appetite for those cryptocurrencies significantly waned as rising inflation and interest rates caused investors to dump more speculative investments. 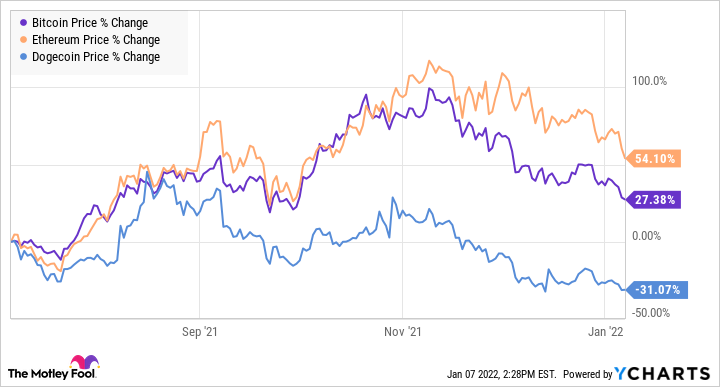 That sell-off countered the notion that Bitcoin and other cryptocurrencies were effective hedges against inflation. It also caused Coinbase’s trading volume and monthly transacting users (MTUs) to decline sequentially in the third quarter. Coinbase said crypto market conditions “improved meaningfully” in the fourth quarter, but we won’t know if it actually stopped that bleeding until it posts its fourth-quarter earnings report in early February.

That slowdown makes it difficult to put much faith into analysts’ forecasts for Coinbase. At the moment, they expect its revenue to rise 467% in 2021 and decline 2% against tough comparisons in 2022, but those estimates could be rendered obsolete by a sudden spike or plunge in crypto prices.

Meanwhile, regulators are tightening the screws on the crypto market. Last September, the Securities and Exchange Commission (SEC) forced Coinbase to cancel Lend, a planned feature that would have enabled its users to lend out their USD Coins (a stablecoin tethered to the U.S. dollar) for interest. The SEC is also widely expected to roll out new regulations for cryptocurrencies, crypto exchanges, and crypto mining companies in the near future.

Those tighter regulations could reduce cryptocurrency prices, cripple some of Coinbase’s features, or force it to increase its operating expenses. To make matters worse, a growing number of competitors — including Block‘s (NYSE:SQ) Cash App and Robinhood Markets (NASDAQ:HOOD) — could lure away more cryptocurrency traders as the market stagnates or shrinks.

What the bulls will tell you about Coinbase

The bulls generally like Coinbase for three reasons: the long-term growth potential of the cryptocurrency market, the expansion of its ecosystem beyond retail cryptocurrency trades, and its surprisingly low valuations.

For example, ARK Invest’s Cathie Wood — who holds Coinbase as a top investment in three of her flagship ETFs — believes Bitcoin’s price will surge from about $40,000 today to over $560,000 by 2026. If that actually happens, Coinbase could generate multibagger gains over the next few years.

Coinbase is also gradually diversifying its business with subscriptions (for commission-free trades, prioritized customer support, and account protection for up to $1 million), new blockchain-based reward programs, an upcoming NFT marketplace, and other decentralized finance products. That expansion could diversify its revenue streams and lock in more users.

Coinbase’s stock currently trades at 29 times forward earnings and less than seven times next year’s sales. Those valuations are low relative to its growth, but they also reflect the market’s trepidation about its future. But if you’re bullish on the long-term growth of the cryptocurrency, blockchain, NFT, and DeFi markets, it might be the ideal time to invest in Coinbase.

Coinbase will likely keep growing, but I believe there are better crypto investment options out there for aggressive and conservative investors.

Aggressive investors might be better off buying cryptocurrencies directly, which could generate bigger gains without the burden of Coinbase’s operating expenses. More conservative investors should simply stick with better diversified companies like Block, which has plenty of exposure to Bitcoin but isn’t an all-in play on the cryptocurrency market like Coinbase.

So while I admire Coinbase as a company, I wouldn’t invest in it right now. The market will likely continue to categorize it as a riskier growth stock this year — and that label could hurt its growth as interest rates gradually rise.