The crypto markets have been seeing a sea of red over the past couple weeks. Total crypto market capitalisation has shed close to half a trillion US dollars since the Omicron variant was named on November 26. 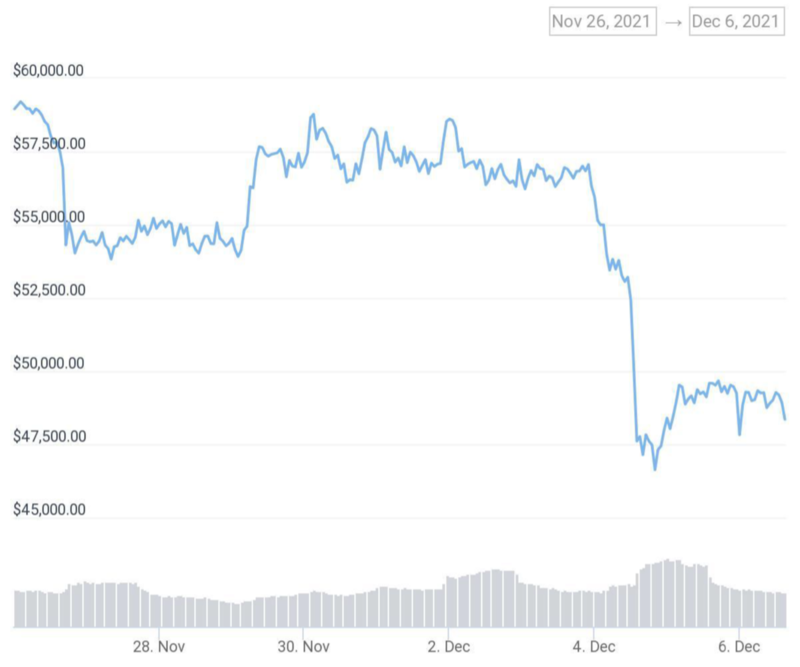 Bitcoin has similarly depreciated against the US dollar over the same time period, with a significant dip occuring on December 4th, where Bitcoin dropped close to $10,000 (~16%) in about the span of an hour, before slightly recovering and closing the day at an approximately 8% drawdown.

The dip likely resulted from a confluence of factors. Inflation and tapering fears in the US had already emerged months prior, and further accentuated by recent pronouncements from the Fed that the current inflation levels may not be ‘transitory’. While within the cryptoverse, there were also growing talks of the market already at the top. The announcement of the new Omicron variant added another factor adding to increased uncertainty, likely accelerating risk-off behaviour from investors.

Flash crashes similar to what happened during the May crash and on December 4 could also likely be attributed to cascading liquidations of the extensive leveraged positions in the markets, making regular shake-outs more violent than they otherwise would be.

With that said, we take a look at different segments of the market to see how they reacted to this dip.

Futures Market – Who got rekt?

News of the Omicron variant on Black Friday (November 26) sent Bitcoin tumbling by 10% to $54k. Despite the dip in price, open interest was not so deeply affected, decreasing by approximately 4% from just over $24 billion, with the reductions mostly spread out across the larger exchanges such as OKEx and FTX. Around $800 million worth of liquidations also occurred during this time. On the surface, it seemed at that time only a minor setback on Bitcoin’s stock-to-flow model of reaching $100k by November’s end.

By the end of the week, cumulative open interest had largely returned to the same levels (~$23 billion). However the very next day (December 4th), we observed a massive nosedive in the crypto markets as Bitcoin crashed by $15,000 in a single day. The move from $57,000 to $42,000 resulted in over 375,000 traders getting liquidated for over $2.6 billion. Approximately $6 billion (26%) of open interest were wiped from the markets, with Binance being hit the hardest, losing nearly half its open interest (~$3 billion). This figure is slightly lower in comparison to the crash in May earlier this year, with $5 billion removed from open interest, or about 29%.

Prior to significant price movements of BTC in the past, we’ve noticed a tendency for funding rates to swing suddenly. These anomalies are usually contributed by Bybit, which is interesting considering that they are dealing with much smaller volumes and open interest compared to Binance and FTX. This is probably due to the fact that the exchange is favored more by retail traders and offers much higher leverage at 100x, compared to their peers that limit leverage levels to only 20x or 50x.

Although we would like to say that abnormal funding rates typically foreshadow substantial price movements, it is not always that clear cut and it becomes more difficult when exchanges are on both sides of the spectrum. For example, exchanges could unanimously have negative funding rates as seen in July, just before the BTC run-up from $33k to $38k. Otherwise, they can also have completely opposite rates, as seen on Bybit and Binance just before Bitcoin’s 10% plunge towards the end of October.

However, this time it was not the case. Although Bybit remained the leader in positive funding, the rates on OKEx and Gate.io were also fairly high. There did not seem to be any one exchange that had a clear discrepancy in funding compared to the others. Our guess is that most traders were caught unaware of the move as general sentiment remained bullish. When the price started to fall this time, it was over a weekend when exchanges tend to experience lower liquidity and volume on the weekends, leading to faster and harder price movements. Since the retracement, we have not seen any notable climbs in open interest while funding rates
have started to return to their previous levels. While most exchanges went back to the baseline level of 0.1%, rates on OKEx have consistently remained negative, indicating that traders on the platform may still be bearish on the current situation. 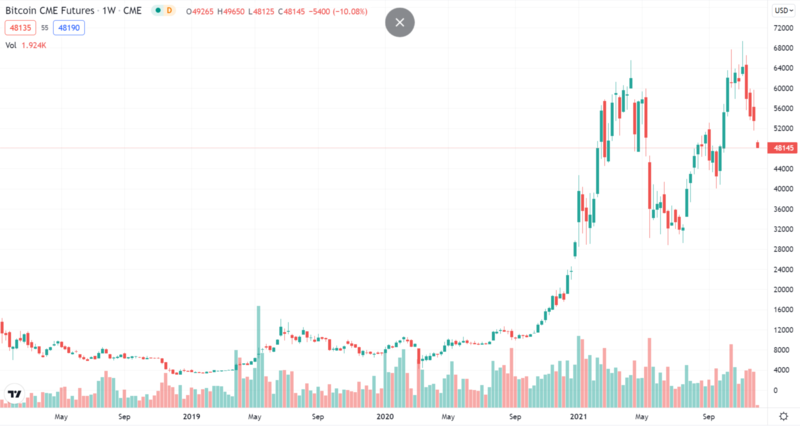 After the recent weekend, Bitcoin CME futures experienced another gap down to $48k. Since crypto markets operate 24/7, there can be a large difference in contract prices between Friday’s close and Sunday’s opening, resulting in the gap. Typically, these gaps tend to return to the historical CME closing prices in order to ‘fill the gap’, so it will be interesting to see how the price of BTC will look like, considering there are numerous gaps at much lower prices that have yet to be filled.

Who fended off the bear well…and who didn’t

While it was a sea of red across the board, some coins bounced back faster, demonstrating greater resiliency to the dip, while others suffered badly and continued to languish. We take a look at some of them in this section.

Overall, LUNA saw a solid rise in price despite the Omicron FUD. There was a ~23% plunge on 4 Dec but against BTC and ETH, LUNA still remained relatively resilient and regained upward momentum shortly after. During this period of bloodshed, LUNA’s circulating supply decreased, most likely due to the increase in burn rate as more people sought the safe haven of UST (Terra’s USD stablecoin). In this case, LUNA would have been working as intended according to its algorithmic design. Additionally, with the highly-anticipated launch of Astroport and Mars looming nearby, there’s been heavy accumulation of both LUNA and UST, presenting a strong narrative for it to run up.

Ethereum’s price plummeted below $4,000 on 4 December, recording a ~10% dip within the span of half a day. It recovered slightly after, closing at ~$4,085 by the end of the day. The cumulative open interest rate on ETH futures registered at $12 billion on 4 December, roughly half of that of BTC futures. Considering this, it came at no surprise that BTC liquidation would be hit harder comparatively, allowing ETH to gain grounds against BTC to hit a multi-year high, despite its nosedive in USD price.

It would seem that MATIC’s flurry of high-profile announcements over the past few months has managed to somewhat keep the Omicron FUD at bay. The Polygon ecosystem has been constantly expanding with more protocols hopping onboard, including Uniswap as well as a lateral development in layer-2 solutions to cope with increasing network demand. Additionally, there was also an increase in institutional support such as its listing on 21Shares ETP and ongoing interests from multiple VCs. The stars were aligned for MATIC to fend off the flow, outperforming both ETH and BTC within the time frame.

Surprisingly, NFTs in general also did not hold up well during the dump. NFT hodlers would historically cash out during an ETH run up to secure liquidity, driving the floor price down in a sellout. The reverse should also be true, where floor price in ETH should increase to keep in pace with the dollar value of the NFTs, or with collectors buying/derisking into NFTs. This was however not the case.

What happened to stables? 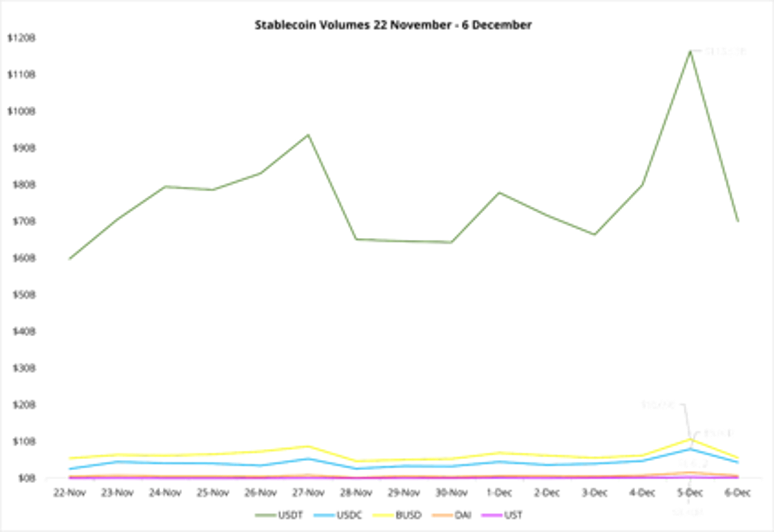 During the tumultuous weekend of crashes and liquidations, the top 5 stablecoins by market capitalization saw a spike in volume. This can likely be attributed to traders fleeing for the safety of stability. 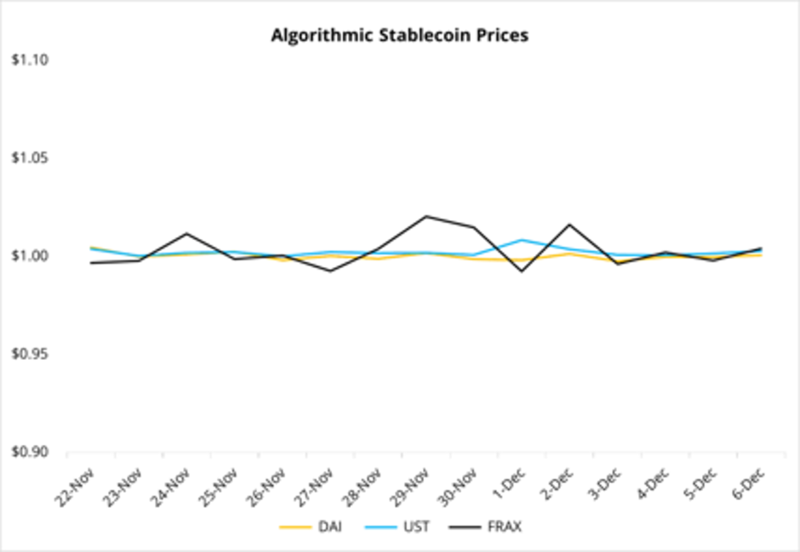 When it came to algorithmic stablecoins such as UST, Dai and Frax, these managed to hold their peg at, or close to $1. Once again, they’ve proven their resilience during such market volatility.

USD stablecoins were not the only fiat-backed tokens which saw increased trading volume during the weekend. Fiat currencies such as the Japanese Yen (JPY), and Korean Won (KRW) saw major increases in their trading volume. Therefore, it could be seen that many players in the market were seeking safety from market volatility, and into stables.

Did DeFi hang on?

As usual, during volatile events DeFi activity rose, pushing up gas prices on the Ethereum chain. However, what is interesting to note is that gas prices were not as exorbitant as expected. At its peak, the highest gwei was only 141 on December 4, 2021. Historically, this is relatively low, especially when you compare with May 19, 2021 where gwei exceeded 2000 at one point. 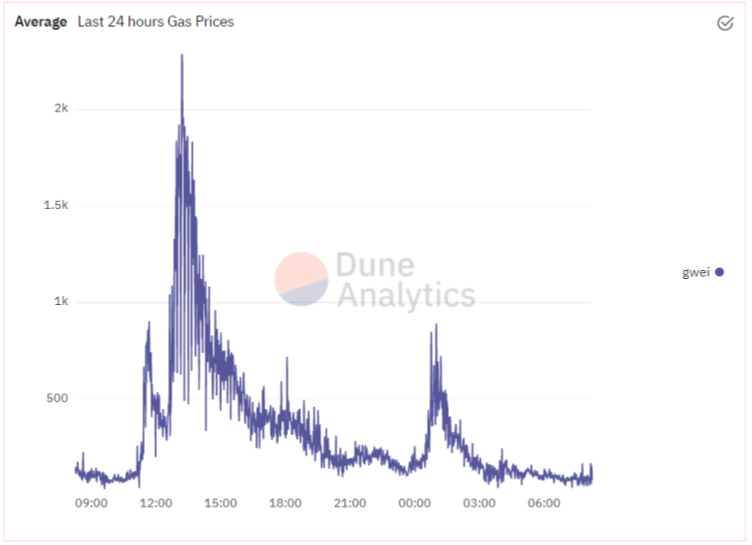 Usually, users will rush to preserve their collateral-backed borrowings while liquidators hunt for underwater positions. But unlike before, degens appear to have been more risk-averse prior to this dip, perhaps taking lessons from May. To our knowledge, there were no protocol failures or insurance backstops that were needed for DeFi protocols. 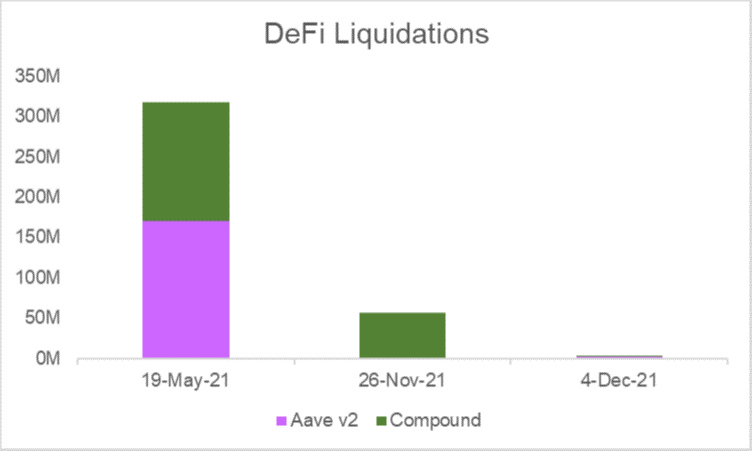 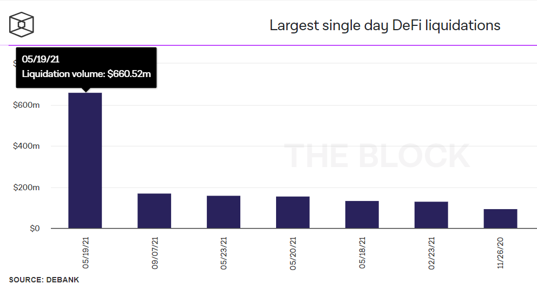 Notably, this is a far cry from May 19th, where there were $660 million worth of liquidations (across several DeFi protocols) in a single day.

Macroeconomic fears plus the May crash likely contributed to higher risk management strategies for DeFi users. Black Friday might have also played a part in extending that fear, as it was the most recent significant BTC downturn that led to a combined liquidation volume of $57 million.

Or maybe, borrowers just ran out of funds and could not increase their collateralization ratios any longer. 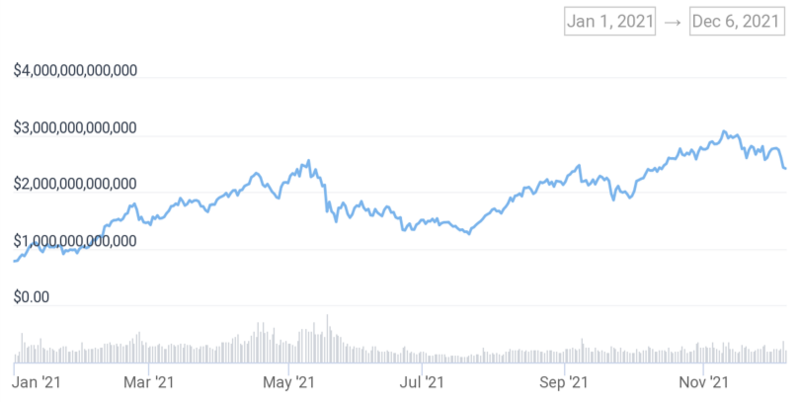 While this might be a bitter pill to swallow for some, it’s important to note that if we zoom out a bit to a more macro view, the crypto market has grown(again) by leaps and bounds this year, despite this dip. Total market capitalization has grown from ~$776 billion in January 2021 to ~$2.4 trillion at date of writing, a more than 3 fold increase. Despite the current dip, Bitcoin has grown by >150% over the same period of time. No growth comes without market corrections, and lest we forget, we are in the midst of an unprecedented global health and economic crisis. 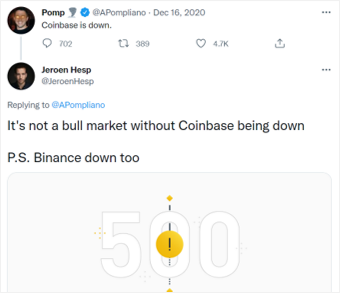 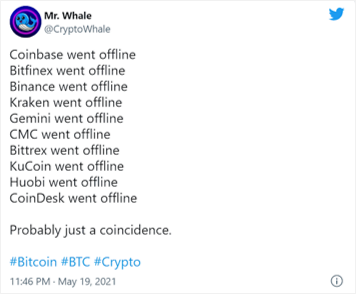 What has also been largely absent from this round’s sell-off is complaints of exchange failures which we have faced in the past every time there has been strong market volatility (whether up or down). This is a good indication that at least the centralised exchanges have managed to remain resilient this round, and have been able to handle the loads over these past few weeks.

In our view, this has been quite an orderly shake-out in terms of market correction – perhaps even more so than previous instances. The CEXes continued trading, while on-chain liquidations unfolded pretty much as expected, without the need for deployment of insurance funds or protocol backstops. Pegged stablecoins also held up remarkably well against heightened volatility and volumes. If taken as a stress test, the industry has passed with largely flying colors, except with smaller bags and bruised Twitter egos. It shows a market that remains healthy, and is continuing to mature. If there is a prolonged dip in prices, we will see if investors flee the asset class, but early signs look positive for now.

For short-term speculators, the dip would have exposed the perennial risk of excessive risk-taking without sufficient downside protection. While prices of different coins will (hopefully) recover at their own pace, a correction helps reset expectations, as well as refocus the community towards building out their respective projects. In the meantime, there are probably bargains to be had for those brave enough to buy the dip. For long term hodl-ers, the question may well be “what has fundamentally changed with crypto now compared to two weeks ago” for you to consider changing your mind, and the answer may well be “actually, not so much”, and that’s a good thing.

Note: This is a developing story, and we will continue to update the article as the market develops. All statistics and analysis are current as at the time of publication.

Did you know the gecko also does some writing here? Hope you enjoy his writing.
Follow the author on Twitter @coingecko