After a strong show last week, the broader cryptocurrency market is witnessing a partial reversal. As a result, the entire crypto market cap has dropped under $1 trillion. Bitcoin has retraced significantly from its 200-week moving average (MA) of $22,800 and failed to give a weekly close above it.

Thus, these levels still act as a resistance to Bitcoin. As of press time, BTC is trading at a price of $21,248 with a market cap of $405 billion. Interestingly, BTC addresses with less than 1 BTC have continued with their purchases. As on-chain data provider Glassnode reports:

Bitcoin Shrimp cohort with < 1 BTC have increased their relative holdings of the circulating $BTC supply from 5.2%, to over 6.0% since the LUNA collapse. This is equivalent to 156k $BTC added to Shrimp on-chain balances in aggregate. 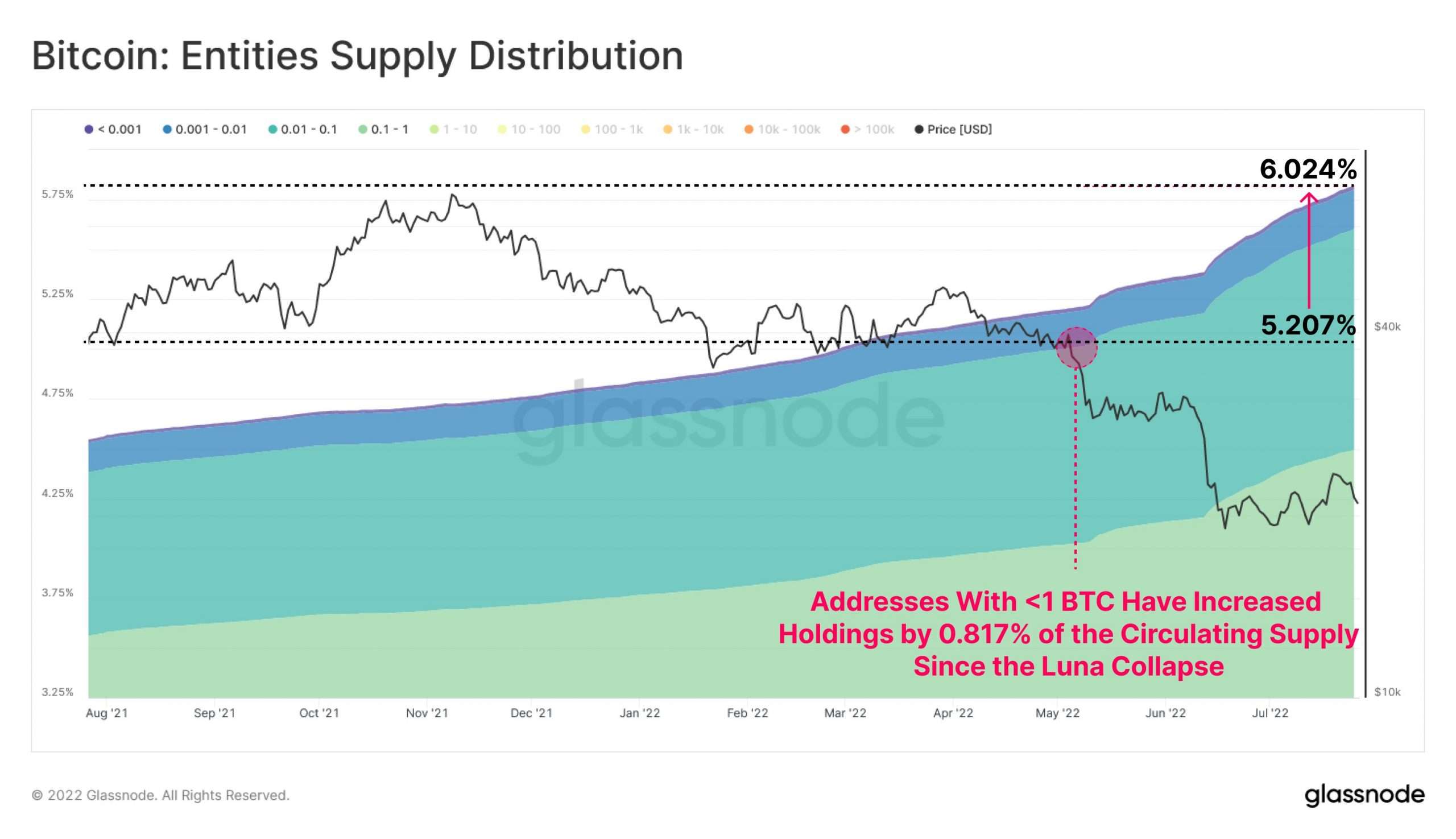 On the other hand, Bitcoin and crypto have come under pressure just ahead of the Fed’s interest hike announcement this week. The global macro environment looks fragile and inflation has been soaring. Market analysts are expecting a 75 basis points rate hike by the U.S. Central Bank. However, some market experts also suggest the possibility of a 100 basis points rate hike to tame the soaring inflation.

The altcoin space led by Ethereum had a sharp recovery last week. Besides, the institutional interest in Ethereum has also been on an uptick recently. However, the pullback in the broader crypto space is also putting up pressure on Ethereum and other altcoins.

Last Sunday, the ETH price shot up all the way to $1,640 levels. However, it has now corrected more than 10 percent in the last two days and is currently trading under $1,450 levels. In the last few hours, the ETH price jumped from its intraday low of $1,360 following a sudden spike in address activity. On-chain data provider Santiment reported:

A huge spike in address activity appeared today, the largest one ever in fact, but on lower time frames this activity looks very coordinated, so take this with a grain of salt.

The recent ETH price rally came on the news that The Merge upgrade shall happen sometime around mid-September.

Apart from Ethereum other major altcoins have undergone a correction. Cardano (ADA) took a diver under 45 cents on Tuesday before recovering back. Cardano has emerged as the most developed asset among its peers considering code pushes, issue interactions, and much more.

On the other hand, Ripple’s XRP Network has seen the address activity spiking to a two year high. On-chain data provider Santiment reports:

XRPNetwork has just hit a huge milestone. The amount of unique addresses currently interacting on the network has exceeded 247k in just a 4-hour window. This is the highest spike recorded since February, 2020.