The Solana token first drew breath in April 2020, valued at less than $1 per coin. At the beginning of this year, on January 1, Solana was trading at just $1.4, which was only a minor increase from its debut value. But, in early January 2021, Solana started its rise, with a significant bullish run in early August, which saw it jump from a low of around $32. At the time of writing, on November 13, SOL/USD was trading at $230, having dropped from an all-time high of almost $260 on November 1. That’s an impressive gain of about 618.75% in only three months. Considering the price of a mere $1.4 in January, SOL/USD gained more than 18,000%, to attain its ATH of almost $260.

Following its exponential growth, SOL/USD flipped most cryptocurrencies, to join the top-five club. It currently ranks as Number 5 on Coinmarketcap, with a total value of more than $73 billion. The closest crypto coin in terms of market cap is Tether, which, at $73.9 billion, is in Position 4. Bitcoin, Ethereum and Binance Coin still retain the crown as the top cryptocurrencies, with a market cap of $1.22 trillion, $563.44 billion and $105.54 billion respectively.

Recent Changes in the Solana Price

Our Solana forecast for 2022 is quite conservative, considering the significant moves it has made in the past. Predicting strong price moves similar to 2021 could also seem over-ambitious, so we have remained prudent in our forecasts for 2022. Of course, the fear of missing out on the proclaimed Ethereum killer could have driven prices in 2021, and we expect this to continue fading as Solana becomes mainstream, and rival protocols, such as Cardano, begin to attract some users. Ethereum is also growing, and so are various networks it supports, some of which could rival Solana. Nonetheless, we see Solana as a worthy project that will stand the test of time as crypto adoption, DeFi and NFT marketplaces grow.

Solana is a programmable blockchain that uses the Proof-of-Stake consensus mechanism and the Proof-of-History to validate transactions. Solana was created to achieve scalability, security and decentralization aspects simultaneously. The network is a high-performing blockchain that supports smart contracts and decentralized applications. Solana’s native token is called SOL, and it can be transferred between nodes in the network. Currently, the crypto token is ranked as the fifth-largest, with a market cap of $73.9 billion. It ranks ahead of Cardano, which has a market cap of $68.5 billion. Comparatively, Bitcoin has a market cap of $1.2 trillion, which is way ahead of Ethereum’s $549 billion.

Solana is a layer-one network with smart contracts capabilities. Smart contracts are codes that execute a set of instructions on a blockchain network and are important for DeFi and non-fungible tokens. Decentralized finance allows users to stake tokens, borrow funds, or trade cryptocurrencies. The Solana architecture currently handles 50,000 transactions per second with a theoretical capacity of 710,000 TPS. The cost of a transaction is about $0.00025 on average, compared to Ethereum’s $51.45.

Solana’s Proof-of-Stake model enables validators to verify transactions, based on the number of tokens they hold. The additional Proof-of-History is a cryptographic clock that keeps track of the order of events in the blockchain ledger. Computers in the network can create blocks without having to match with other nodes in the network.

Solana has another feature called Gulf Stream, which enhances network scalability. Gulf Stream is a Mempool-less transaction forwarding protocol. The protocol reduces the unconfirmed transaction pool in the network, allowing validators to reduce both confirmation times and the memory load.

Anatoly Yakovenko, a former Qualcomm and Dropbox software engineer, founded Solana in 2017. Eric Williams and Greg Fitzgerald later joined him. The team aims to make Solana a highly effective permissionless blockchain and distributed protocol. Solana was officially launched in 2020. Solana Foundation, a non-profit organization, which is based in Switzerland, supports the network’s activities.

Decentralized Finance (DeFi) applications have grown exponentially, to a Total Value Locked of $179 billion as of November. Solana network supports $5.94 billion of TVL space. One of Solana’s notable projects is Serum, which is a decentralized exchange best known for its high transaction speed and low fees. The exchange runs on an on-chain central limit order book and matching engines. Serum also supports cross-chain asset swaps and stablecoins.

Solarians is another important project on Solana. It is a collection of 10,000 randomized, generative NFTs robots. Each of the NFTs has its history stored in the Solana blockchain. Degenerate Apes was the first Solana big step in the NFTs. The network managed to sell 10,000 ape NFTs in under 10 minutes. SolFarm is a crypto yield aggregator launched on Solana to offer auto-compounding vault strategies. The protocol has $ 1.03 billion in total locked value and its native token, TULIP, grants holders on-chain governance. The Solana blockchain also supports digital games like Star Atlas, where players play to earn ATLAS tokens.

The Solana project has attracted many investors, including Andreessen Horowitz, Polychain Capital, CoinShares and Alameda Research. Solana Labs has announced that it raised $314 million in June through the sale of the network’s tokens.

Currently, Solana has over 400 projects on its network, including games, decentralized exchanges, staking platforms, storage solutions, and Metaverse.

Solana is driven by the high capacity for global scale, with speeds faster than other layer-one networks, like Ethereum. Ethereum currently supports about 15-45 transactions per second, with high-energy consumption, due to the Proof-of-Work model. Solana’s growth has not been without challenges. The network had an outage in September, which persisted for about 17 hours. The network came under scrutiny for the outage, which was blamed on resource exhaustion.

Solana has developed innovative partnerships with notable projects such as Chainlink, Tether, Terra and Raydium. Solana’s successful launch of its Wormhole created a bridge to other networks. The Wormhole allows users to move digital assets between Solana and Ethereum, easily and cheaply. The network has announced that it will connect Terra LUNA and Binance Smart Chain in the next step of the Wormhole development.

Potential to the upside

Bitcoin has surged to a high of $66,000, compared to earlier times when it traded at about $100. With the major tokens trading at a high price, investors are looking for low-priced tokens with a potential similar to that of Bitcoin. Solana is one such alternative coin that investors believe has a higher potential upside.

The digital community is another factor that is giving Solana bullish momentum. Solana has created a big community through its numerous hackathons and grants to promote its activities on the blockchain network.

The Future of Solana

Solana faces competition from other established blockchains, such as Ethereum. Other networks, like Cardano, are also competing to deliver faster transactions at low fees. Competition from the developed and new networks could be a threat to Solana in the future.

The dynamics of the regulatory framework also determine Solana’s future. The crackdown on cryptocurrencies in China in September saw SOL drop by 60% that month. The US Securities and Exchange Commission released a report in November, saying that pseudonymity and the lack of transparency was a hurdle in the DeFi sector. With such views being announced by the commission, it is unclear what regulatory measures they could devise, and what the resulting impact on DeFi will be.

Solana is not a fully decentralized network, since it has not established many validator nodes across the world. Investors could remain skeptical about this, unless Solana addresses the issue. Solana has reportedly benefited from the price of Ether and the increasing gas fees. Whenever Ether has surged, Solana has replicated. To some extent, the price of Ether will influence Solana’s price in the future.

Although Solana continues to attract developers, with its low transaction fees and faster network, it is far from overthrowing Ethereum, which is planning to roll out the Ethereum 2.0 upgrade. The upgrade is expected to migrate the network to the Proof-of-Stake model, in order to reduce the high-energy consumption.

Since the beginning of August, SOL/USD has demonstrated a strong bullish trend with clearly higher highs and higher lows. Conversely, SOL/USD has failed to break below the 50-moving average (blue) since mid-August, which is a manifestation of a sustainable uptrend for the crypto token. In the same period, SOL/USD has traded below the 20-moving average (MA) only once, in a market correction in mid-September. However, although it will be difficult for SOL/USD to make a major correction, relying on the daily chart can help identify potential correction points for SOL/USD, at least in the medium term.

Remember that in our price forecast for the first half of 2022, we predicted $250 as the potential low for SOL/USD. This is solely based on the fact that the $250-$260 area is coming out as a potential top for SOL/USD, before it makes another bullish move. We project that the area will be a potential support zone in the first half of next year. However, the daily chart shows that the previous top of $193 has become the new support for SOL/USD. If the $250-$260 area resists a further surge in SOL/USD, we expect it to drop to the $193 level.

The chart shows that SOL/USD is oscillating around the 60-70 RSI. This means that SOL/USD is overbought, and as buyers take profits, we could see a temporary drop in prices. Of course, the projection does not suggest that SOL/USD is unpopular, and that a further rise is potentially not possible. We believe that SOL/USD needs to clear $250-$260 before we will see another long-lasting bullish move. It is also interesting to note that SOL/USD is above both the 20 MA and the 50 MA. We need to watch the 20 MA, as it looks set to break below, which will confirm our projected correction, with a potential price drop to $193. 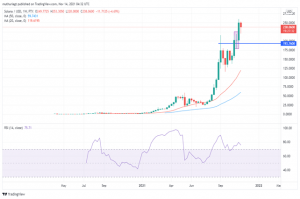 There is not much to explain on the weekly chart for SOL/USD. Nonetheless, we can note that $193 is clearly a support zone. We can also identify a bullish pin bar at $193, which reinforces a further uptick in prices. Both the 20 MA and the 50 MA are way below the current price, and SOL/USD appears unlikely to touch it in the near term. An ongoing correction from SOL/USD’s top level, at $250-$260 can be observed, with the RSI in the overbought area at 75. Nonetheless, there is a twist in the current correction, as an apparent bullish pin bar can be seen forming at the top for SOL/USD. Although the pin bar could take prices higher, if it closes up, we need to see a clear breakout above $250-$260 to consider a new bullish momentum to be sustainable. Nonetheless, the final verdict is a buy for SOL/USD, as the current momentum seems difficult to stop. At the same time, further developments on the Solana network could potentially continue to support prices.