It’s been a rough road for Coinbase (NASDAQ:COIN)…but prime time for Ethereum Classic (ETC-USD). And Polygon (MATIC-USD) continues to rack up wins with the launch of the first Web3 smartphone. Let’s dive in to the top stories in the New Digital World.

Tuesday was a big trading day, ahead of today’s interest-rate decision by the Federal Open Market Committee…

And Coinbase (NASDAQ:COIN) got hit particularly hard as word spread that an insider-trading case against a former Coinbase employee “could have broad implications” for the industry.

If you’ve heard any of Cathie Wood’s trades… You’ll know it’s more her style to boldly “buy the dip.” And that’s just what she did with Shopify (NYSE:SHOP) as well as Roku (NASDAQ:ROKU) yesterday.

Tuesday was a double-whammy of bad headlines for Shopify: The e-commerce company missed on Q2 revenue and earnings, plus laid off 10% of its staff!

And yesterday, the ARK funds bought 1.8 million more Shopify shares (across those same three ETFs that sold Coinbase shares). Cathie’s ETFs also went on a SHOP spree in May, plus smaller purchases of SHOP in April, ahead of the last earnings report.

What’s the game-plan? ARK’s thesis on Shopify seems very different than Coinbase. Most notably, Shop Pay gets frequent compliments from ARK analysts. First, it got the merchants on board… Now, it’s rolling out “buy now, pay later” and “tap to pay” features for consumers – to own both sides of a sale!

This could explain why, in yesterday’s trades, ARK was a more aggressive SHOP buyer in the fintech fund (ARKF) than ARKK or ARKW.

Also worth noting: Shopify is integrating NFTs into its business model – as well as bitcoin, which has been a major bullish stance at ARK, too. It seems that while Coinbase may not be quite ARK’s style anymore… Shopify still exemplifies several of their Big Ideas for 2022 (and beyond)!

“Use Ethereum Classic If You Like Proof-of-Work,” Says Vitalik Buterin

Below on the 2022 chart, we see ETC (orange line) spike in March – quickly fall way off the ledge – then spike again in mid-July. These moves were way sharper than anything ETH experienced (blue line): 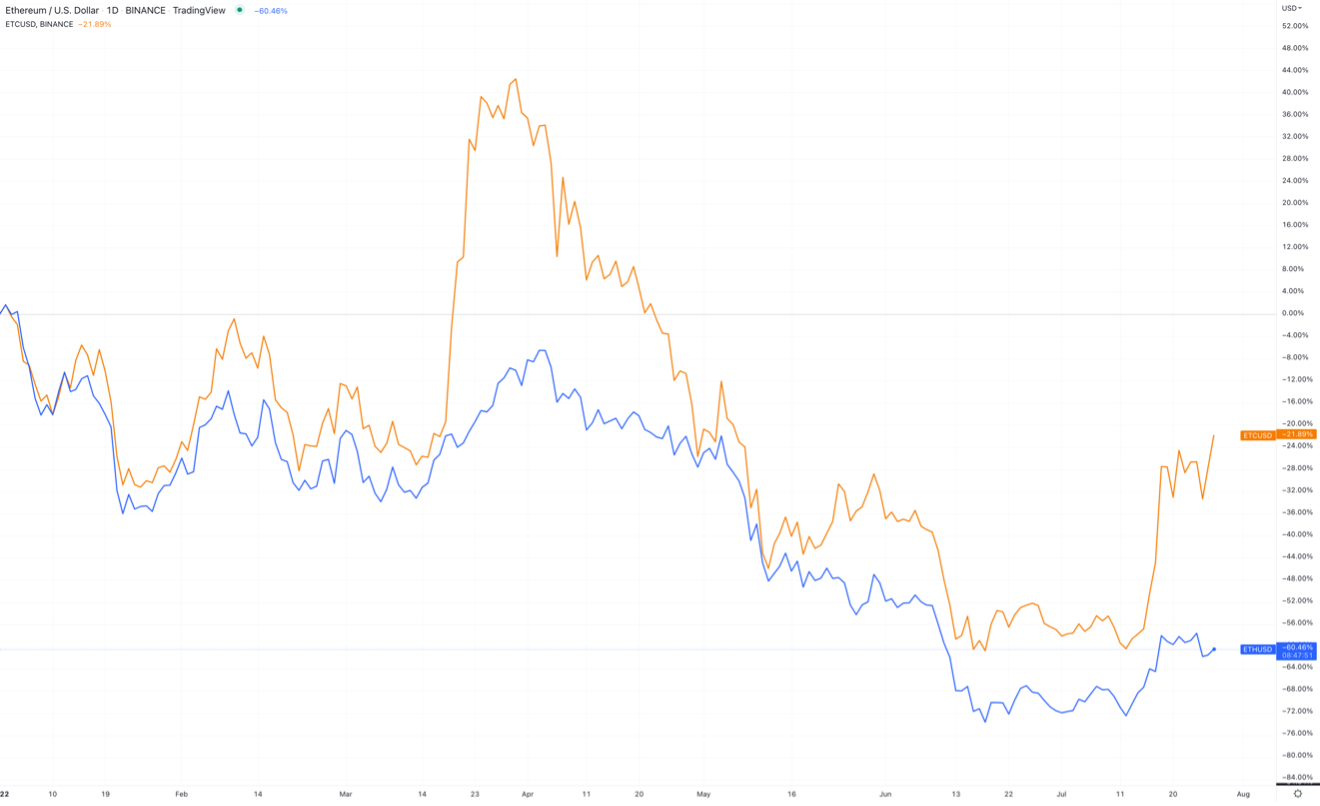 That latest rally came as some commentary on Ethereum Classic by ETH founder Vitalik Buterin made the rounds on Twitter. In a speech last week, Vitalik said: “If you like proof-of-work, you should go use Ethereum Classic; it’s a totally fine chain.”

Context: Once again, Ethereum developers have set a date for the big “Merge”; they’re targeting September 19 as when proof-of-work will go bye-bye.

The thesis with ETC would be that ETH miners have to go somewhere after that. “That could benefit Ethereum Classic since it’s the original version of Ethereum and could therefore ensure an easy migration for miners,” as Cointelegraph puts it. Crypto mining is a tough business in a bear market – but we definitely saw how, when ETC turns up, it turns up hard.

First Look at New Web3 Smartphone with Polygon for NFTs

It doesn’t hurt that the Nothing Phone (1) just shipped. While the name has me rolling my eyes, the reviews make it seem pretty cool – a fun, retro take on the iPhone (but with an OS based on Android). I may have to check out the next model; the Nothing Phone (1) is not available in the United States, as it hasn’t been FCC certified.

But as of last week, the first Web3 smartphone is available in much of Europe and Asia, plus Israel, the UAE, and India. And its creators chose the Polygon network for its NFT feature: “Display your NFT collection and track floor prices directly from Phone (1)’s home screen with the NFT Gallery.”

The main thing that stands out with Nothing Phone (1), though, is not NFTs…but the back of the phone! When you get a notification, it can light up in distinct patterns…perfect for the hearing-impaired, or when you need the phone on silent. Its sounds are kind of analog, ‘80s-inspired, and the apps have a retro look, too. 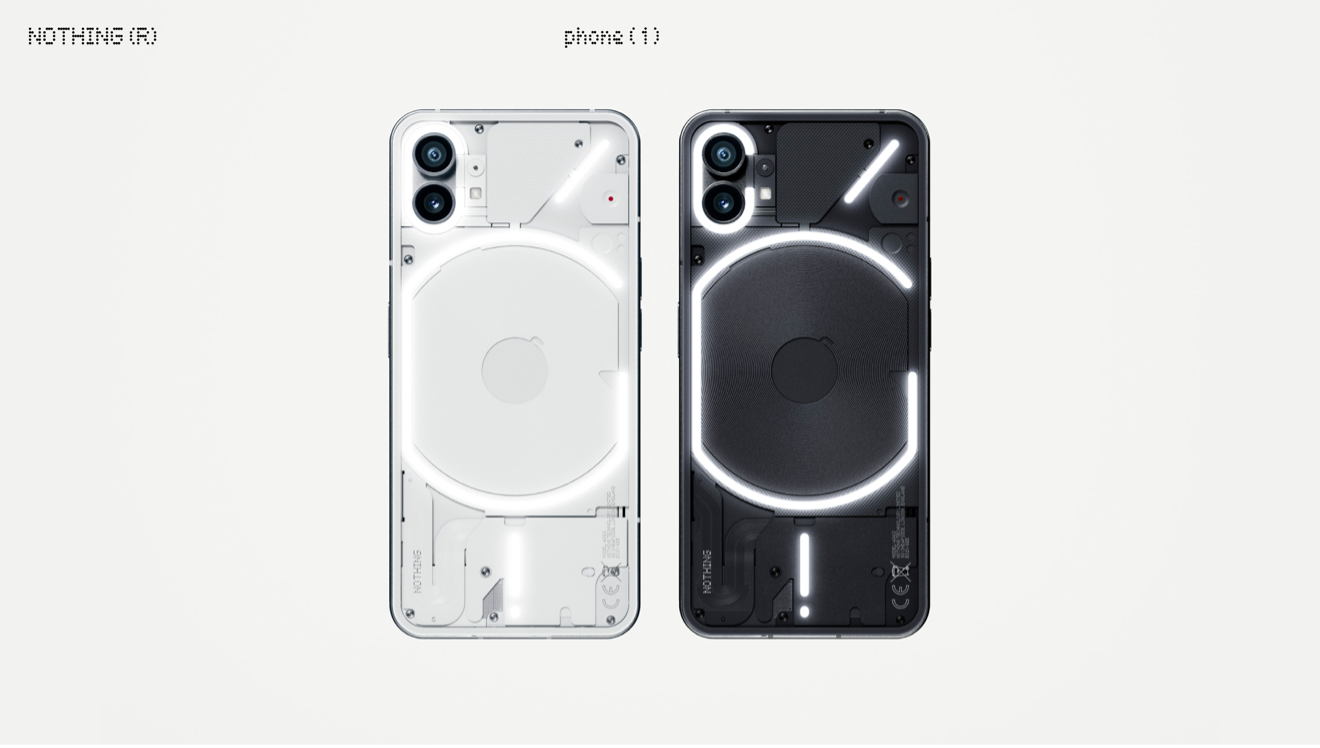 All this to say: I think the Polygon phone could have more broad appeal than, say, the Solana Phone. That one is a typical smartphone but with Solana (SOL-USD) integrated for the crypto fans. Nothing Phone (1) is a trendy phone that happens to allow NFTs.

Solana Phone won’t be available until “early 2023,” but at least it seems it will be available in the United States at that point. The Polygon phone hasn’t set a date for that yet. But once it does… 2023 could be a very interesting year for blockchain adoption through hardware! And two major cryptos will be involved all the while.

Please link the below image to: https://blockworks.co/podcasts/untold-stories/ 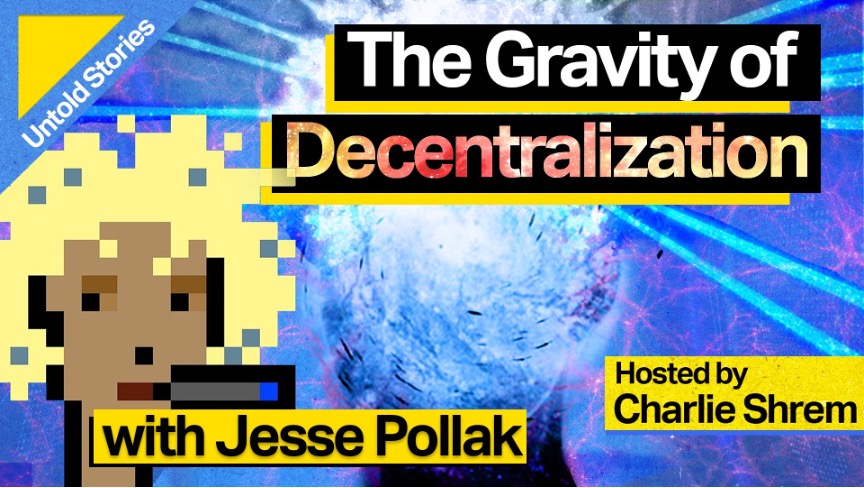 What sector of crypto excites you the most? Before you decide – check out the discussion among two crypto experts: our own Charlie Shrem and Jesse Pollak, who appeared on the latest episode of Charlie’s Untold Stories podcast.

Jesse Pollak is the senior engineer at Coinbase who was in charge of building the Coinbase app, Coinbase Pro, and Coinbase Wallet after his public key infrastructure startup was “acqui-hired” by Coinbase in 2016. There’s some “crypto cred” for you!

On the date of publication, Ashley Cassell did not have (either directly or indirectly) any positions in the securities mentioned in this article. The opinions expressed in this article are those of the writer, subject to the InvestorPlace.com Publishing Guidelines. To have more news from The New Digital World sent to your inbox, click here to sign up for the newsletter.